Congratulations to the winners of the Anthropology Photography contest!

Amelia is a graduating senior and an Anthropology major. This year, she wrote an honors thesis called, “Booty Hop and the Snake: Race, Gender, and Identity in an Atlanta Strip Club,” for which she also won the Undergraduate Shostak Award for Excellence and Humanity in Ethnographic Writing. The award winning photograph is called “Everything in Excess.”

This photo is of my family’s Great Dane, Yeagar, blocking the flat screen television in our game room. Behind the dog is a wall of photos from family trips all over the world from when we were children. This photo emphasizes an aspect of the culture of wealth in the United States. Everything in this photo is in excess. The size of the dog, the size of the television, and the size of the wall covered in photographs from around the world. The irony of this image is that the excessiveness of the size and wealth in the foreground is contrasted with the images on the wall which display family trips to predominantly less affluent areas of the world in Kenya, Tanzania, Liberia, Mexico, and Israel. The wall offers a glimpse of other realities of the world while being displayed among the comfort of an upper middle class family in the U.S. This image speaks to the culture of wealth in the United States where people often display said wealth through conspicuous consumption but also through displaying mementos representing the contrast in economic status of the reality of majority of the world. 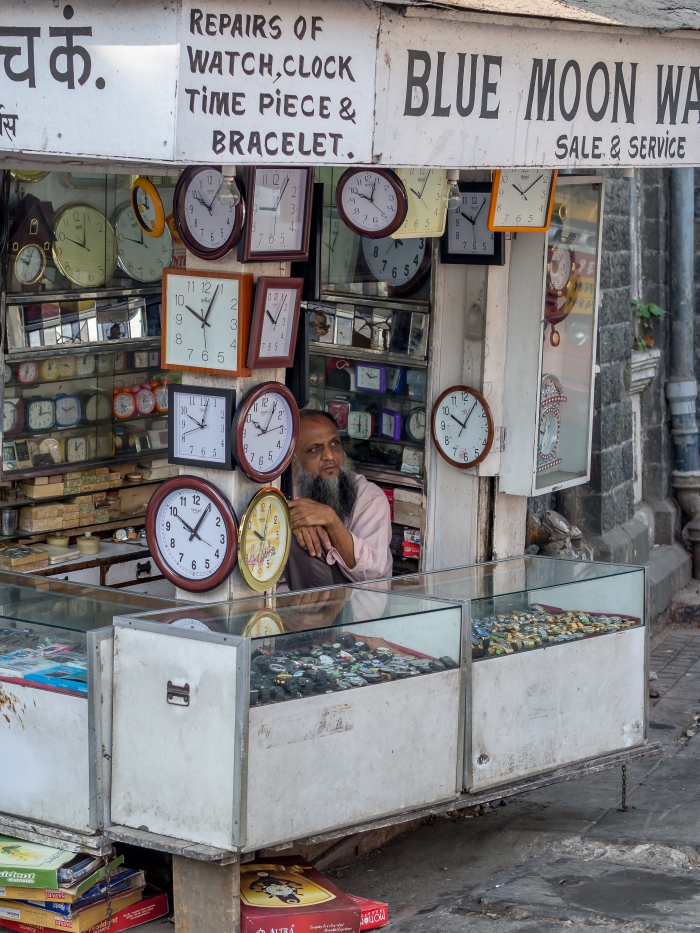 Aiman has recently returned from fieldwork in India for his dissertation, “The Elusive Community: The Making and Unmaking of Muslim Minority Voices in Mumbai, India: An Ethnographic Account.” The second place photo was taken in Mumbai.

Who – The owner and his watch shop     What – Waiting for customers   When – 24 December 2016    Where – Opposite the bustling CST terminus (formerly Victoria Terminus) a World Heritage site and tourist hotspot, Mumbai, India

The picture captures a moment in this watch shop owner’s tiring wait for customers amidst the bustling environs of the World Heritage site. With the availability of cheap mobile phones mostly made in China most people have stopped using watches and clocks to keep time and small businesses such as this one are struggling to stay afloat.

Sarah is currently conducting fieldwork in the Italian Alps for her dissertation, “Climate Change and Well-being in the Italian Alps.” Her third prize photo similarly displays her interests in climate and human interactions with the environment.

The photo captures a bike in the middle of the 4000 square mile Salar de Uyuni in Bolivia, the largest salt flat in the world. The photo suggests the presence and activity of humans in an otherwise empty and seemingly inhospitable landscape. People from nearby towns arrive by bike, foot, or truck to harvest the salt, which they collect into small piles and then transport out of the flats. The Salar is an important international source of salt and the mineral lithium, used to treat bipolar and to make electric car batteries, smartphones, and fertilizers. Bolivian president Evo Morales has promised to develop the extraction of minerals from the flats to meet worldwide demand. While increased extraction would bring more jobs and much needed economic growth to the area around the Salar, local residents worry about the environmental impact and the impact on tourism. The flats are a major tourist destination, a stop on the “gringo trail” through South America. The future of the flats remains uncertain as international, national, and local political, social, and economic interests and opinions continue to clash, some people wanting to push forward, others not wanting the Salar to change. In the meantime, local residents continue to ride their bikes into the flats, harvest its salt and show tourists its beauty, and make a living off a harsh landscape that has remained unchanged for centuries.

Kaitlin is currently conducting fieldwork in China, for her dissertation, “Clans and Classmates: Kinship, Migration, and Education in Southwest China.” Her photo was chosen by those who visited the exhibit and voted for their favorite.

A Nuosu funeral in Dechang County. In Nuosu culture, funerals are more important than births or weddings, and they bring relatives and community members together. In this photo, women prepare fireworks to guide the funeral procession and the deceased’s soul down the “road of spirits.” This photo is “anthropological” because it shows the relationships between the living and the dead, who continue to live through constant cultivation and reinvention of the community.

Thank you to everybody who participated!