Since 2007, Emory University has partnered in the Emory-Tibet Science Initiative (ETSI) with His Holiness the Dalai Lama and the Tibetan Buddhist community, to realize their vision to incorporate science into the monastic curriculum. Emory Anthropology Department professor Carol Worthman has spearheaded the neuroscience track from its inception, orchestrating a 6-year curricular development and pilot phase, and then implementing it at the 3 biggest monastic universities in south India. “In December, 2019, we celebrated the successful roll-out of the entire 6-year ETSI curriculum in the monasteries at a gathering with His Holiness, the monastic community, and ETSI leaders in Mundgod, India. We also graduated the first cohort of monastics to complete the 6-year program. These were historic undertakings for the monastic community, and especially for monastic students and the many senior monastics who work to realize the goal of monastic science education and already are productively exploring fresh ideas and insights from these distinctive perspectives.” (Carol Worthman)

The events not only celebrated ETSI milestones, but also inaugurated a new debating hall at one of the big monasteries and, most importantly, marked a 600th anniversary of Je Tsongkhapa, founder of a major school of Tibetan Buddhism to which His Holiness belongs. Photos show the interior of the vast new debate hall, celebration of graduating classes, and presentations by Worthman of reflections and the neuroscience books ETSI has produced. Also included is a view of Drepung Loseling prayer hall (the Dalai Lama’s home monastery), where ETSI were held for the first 3 years until a large science center was built. The photo of illuminations at Drepung honoring the anniversary show that monastics really know how to celebrate! 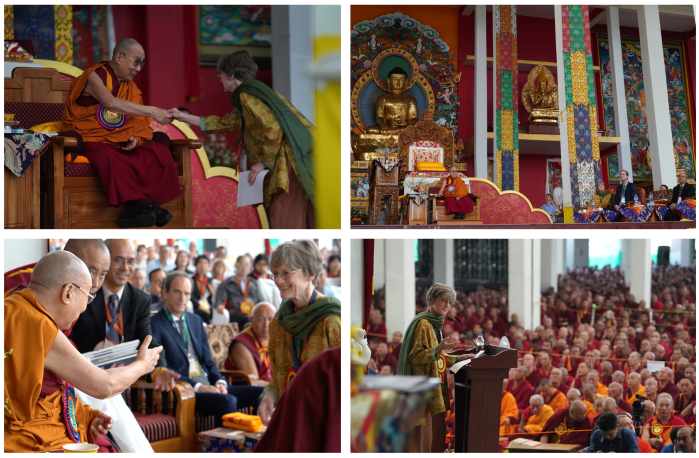